【Table on corrosion resistance of titanium】

The titanium in JIS 1st grade or ASTM Grade 1, which contains less amount of oxygen and iron, is used for the applications requiring high ductility, formability, and corrosion resistance, but less strength.

The titanium in JIS 2nd and 3rd grades or ASTM Grade 3, which has moderate strength and high ductility, is widely used in general purpose, and is a most available one in the market. The major applications are for an airplane fuselage and for an engine part such as an engine shroud. The structural material for a marine construction or a chemical industry instrument is another good application.

The titanium in JIS 4th grade or ASTM Grade 4 is used for places especially requiring a strong material, which is added with TiO2 during dissolved for increasing the oxygen content.
(From “Fundamentals of Titanium and Its Working”, the Japan Society for Technology of Plasticity, 2008, P11.)

【The four major features in the table above】

①1. The density of 4.5 – 4.6 g/cm3
Having the second lowest density following aluminum, titanium has the lightest weight among the major transition metals (iron, nickel, copper, and etc.), which is 60% of that of iron.
Industrial-use pure titanium has a high tensile strength of 270 to 750 MPa, while steel materials have that of 750 MPa. Therefore, the specific strength of titanium, or the strength-to-weight ratio, is higher than that of steel. Titanium alloys have higher tensile strength of 1000 to 1600 MPa.

2. Young’s modulus
Titanium has higher Young’s modulus than aluminum, which is equivalent to that of cupper, or half of that of iron. This means that titanium can be bent twice as much as iron when loaded with the same amount of stress.
This low Young’s modulus of titanium can be an disadvantage, as well as being an advantage at the same time. Titanium is most suitable for the applications such as a car suspension spring requiring low elastic moduli, while, due to its insufficient rigidity, it requires to have a thick-wall to build up an ordinal structure with it.

3. Thermal conductivity
The thermal conductivity of titanium is one sixteenth of that of aluminum, or one fifth of that of iron, which means that titanium is hard to conduct heat. This is one of the titanium’s major disadvantages, leading to the increase in the processing cost. The heat generated by processing is hard to be dispersed around the vicinity area of the processed point, resulting in quick wear-out of a cutting tool.


(From “Fundamentals of Titanium and Its Working”, the Japan Society for Technology of Plasticity, 2008, P11-12.)

Mechanical properties of pure titaniums and other metals

1. Pure Titanium has the equivalent strength to that of common steel, and about half of that of a typical stainless-steel, SUS304.

2. Pure titanium is easily bent because of the Young’s modulus which is bigger than that of aluminum or is about half of that of killed steel. It has the biggest yield strength per Young’s modulus among the metals in the table above. The large spring-back volume makes it difficult to be formed to a desired shape.

3. Pure titanium has a considerable smaller n-value (work hardening exponent) than other metals so that it can be formed with sharp edges but has a poor punch stretchability.

4. Pure titanium has a considerable bigger r-value (drawing workability) than other metals, resulting in excellent deep drawability.
(From “The story of Titanium”, Japanese Standards Association, 1995, P85-86.)

Specific strength-to-temperature of titanium and other metals 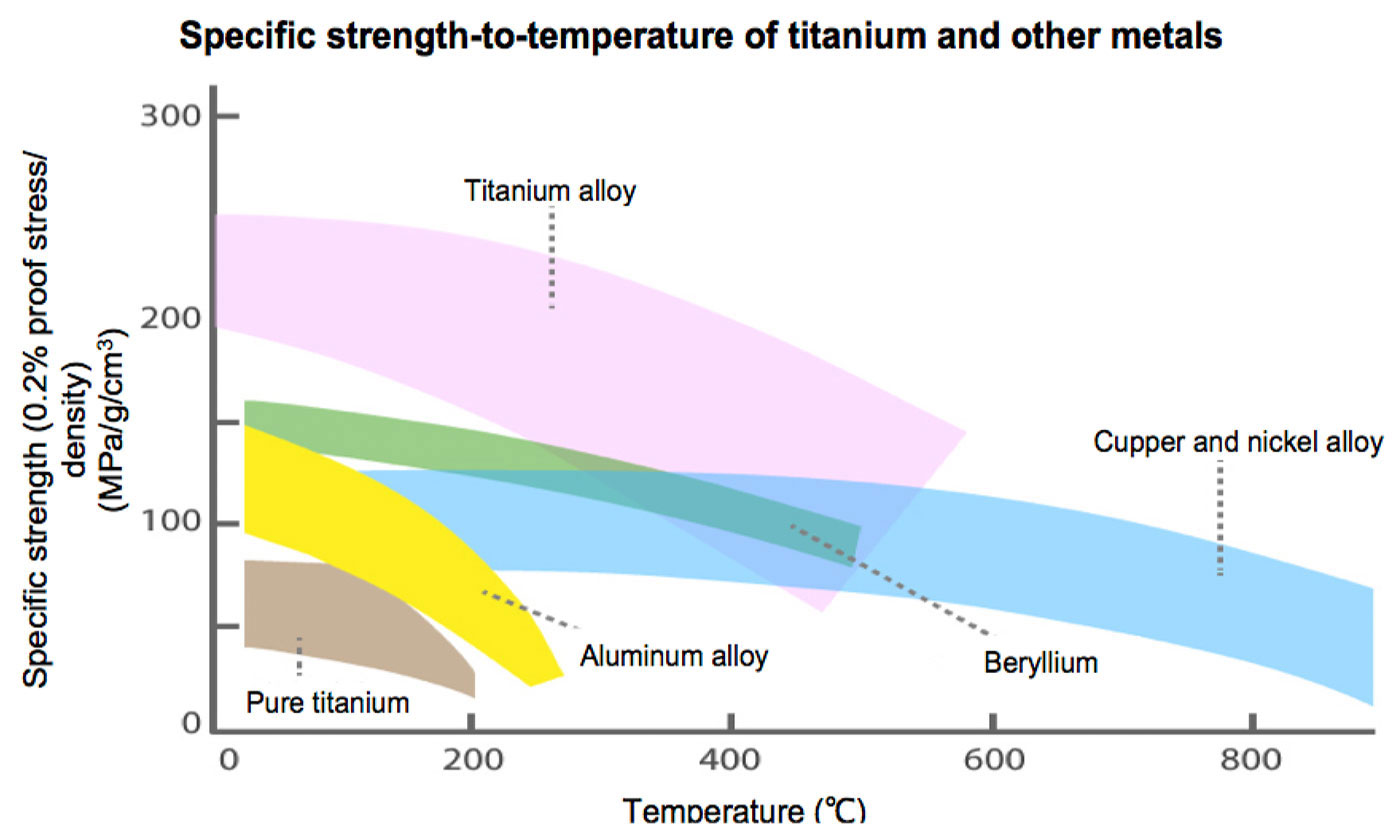 What is titanium? Advantage for βtitanium : Light! Strong! Materials with Excellent Corrosion Resistance »